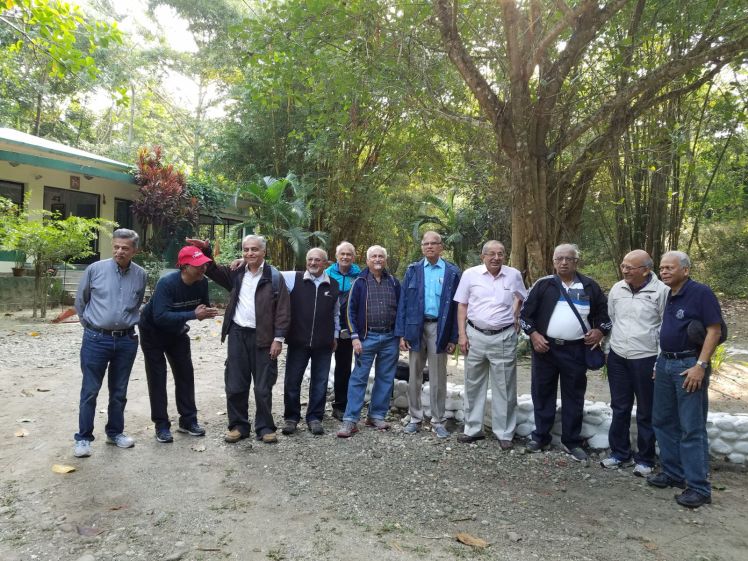 Gather a dozen ex IITians for a tour of the mountains and you have a potent mixture of boisterous guys with their spouses in tow, a scene that would make Govindas on a matka breaking spree look like a silent procession.

With Arun Joshi as the ‘Schoolmaster’ who will not tolerate any nonsense, the show only gets merrier. Arun relishes the role. By the time I finish this write up you can bet he will be ready with a detailed account of the epoch-making tour.

Luckily, he seems to have mellowed with age. Otherwise how can you explain Albert and me returning without any scars, bruises or other marks of benign violence on our bodies? 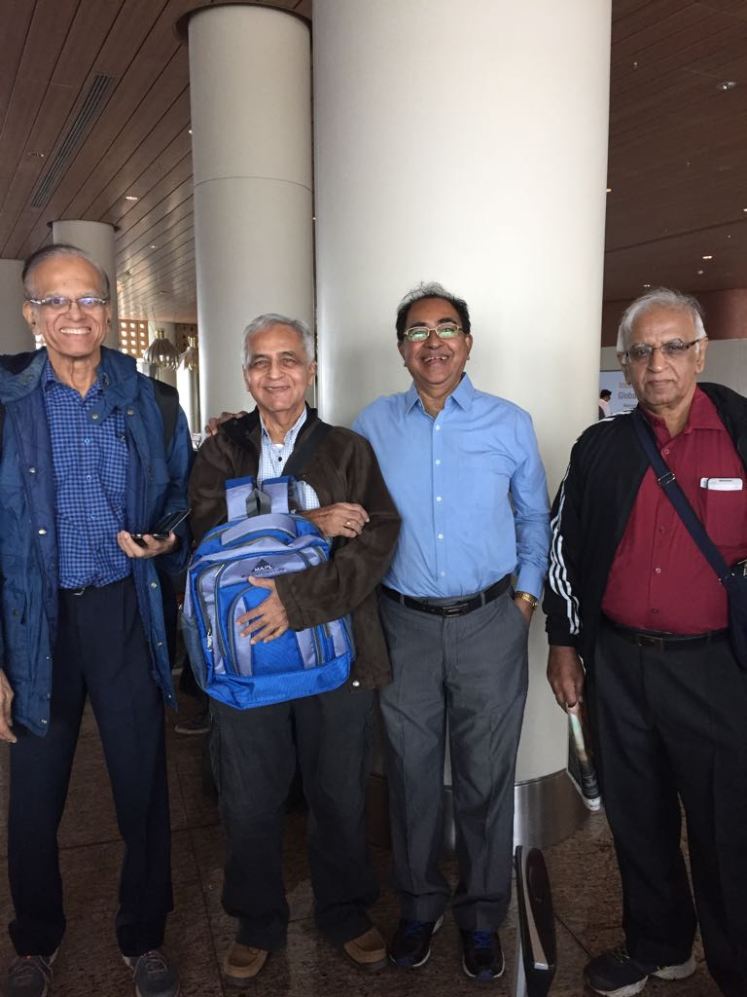 The moment we landed at Bagdogra – a sleepy town tucked away in northern Bengal, the inevitable photo-session was ordered. More photo sessions were to follow. The antics of Albert came alive and all that one could hear in the entire arena were Albert’s booming commands.

“Hey, did any one lose any bags? Is everyone ok? Are your spouses ok? It is cold and will become colder so all of you better get your jackets, monkey caps and hand gloves – it will be difficult to halt on the mountainous winding roads!”  Our ‘Netaji’ was in full control, and the result was that we had an uneventful three-hour flight.

Five spanking new Innova behemoths were lined up outside the airport to transport the tired bunch.  Deepankar – our tour operator – guide- caretaker smiled only when I asked him to, behavior that met no-nonsense Arun’s full approval. My request to Deepankar to teach the Bengali equivalent of ‘hello, how are you, where is the toilet’ etc., were swiftly swept aside with one command: “Get in the vehicle and get on with the road journey, you can wait for the translation later!”

I reckon Deepankar marked me out as a troublemaker. Albert was the other guy he had to be super careful about. Little did Deepankar know what lay in store for the group. The troublemaker would, one day, opt to become a monk. Or did he?

The Innovas rolled on, past Bagdogra town, Siliguri displaying huge cut outs of the vibrant Chief Minister all over.  As it turned out Ashok Doshi was assigned to me as my roommate. Though we did not know each other well during our IIT days, we bonded soon enough – there was so much to talk about!

Travelling with a group of people who already are acquainted with one another is comforting. There is no need to wait for the warming up period. No need to wonder if you would antagonize, or offend someone because you’ve already been there, done that, decades ago!. We all know what makes the other tick. So off we went, and it was pure joy from the word go. 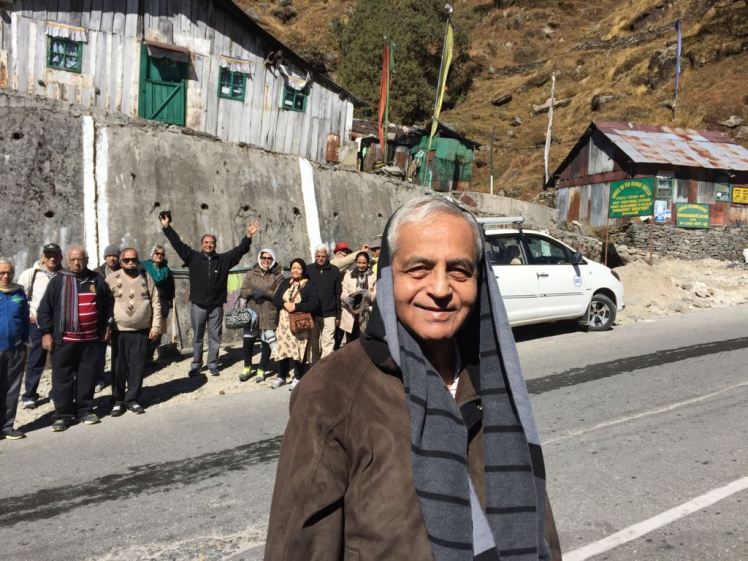 Arun had done a spectacular job in selecting some high-end hotels for us. The one at Gangtok where we finally arrived after an arduous road journey, was the ideal to relax in. The last few metres to the gate of the hotel were on an almost 45 degrees downhill incline, prompting the ladies to demand a vehicle to go to the market. Shopping shouldn’t be an uphill task, and definitely not when you’re on holiday! 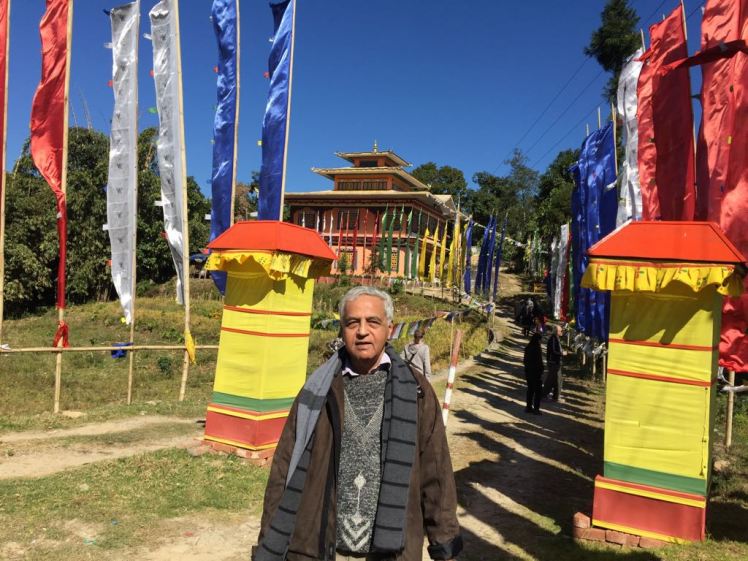 The tour was a revelation. Like most others, I couldn’t take my eyes off the majestic snow-capped peak of Kanchenjunga that was visible from almost all the corners of Gangtok. All throughout I was greatly impressed by the cleanliness, a healthy respect for traffic and other laws, the plastic free environment and the helpful and polite nature of the local residents. The roadside tea stalls were the ones we enjoyed most. Chatting with the owners, indulging in some silly shopping, buying hand gloves as if it was going to snow the next day… 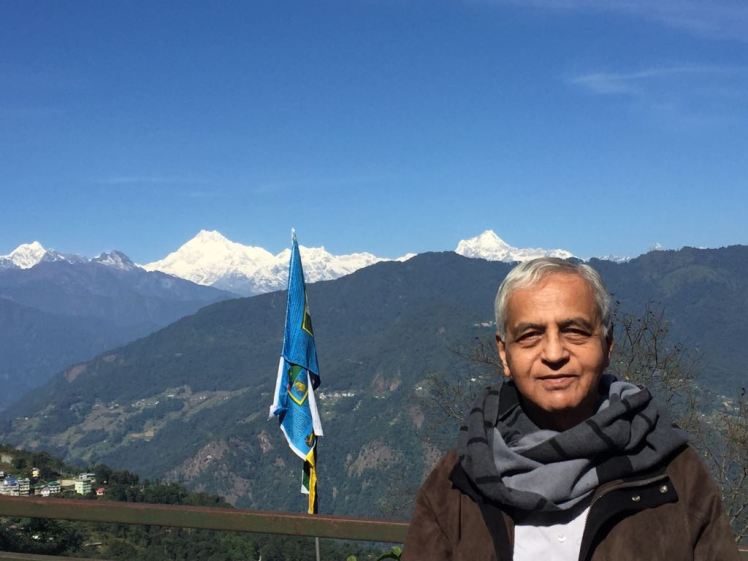 Past and future lives

Much time was spent reliving the past, particularly hostel-life, back-slapping one another and relating almost everything to the IIT curriculum in some hilarious manner.  Birthday celebrations was even greater proof of our Netaji’s organizing abilities, who established protocols worthy of the White House, for example, who would stand next to the birthday boy for each photo session and who would put the first piece of cake into the mouth of the befuddled over grown ‘birthday boy’. Had Arun not been our leader, the tour would have turned back from Bagdogra to Mumbai. Here’s to you, Arun!

And that is why now, I hand over the onerous task of describing the details of the destinations to our Arun.

But I must also say something about my sudden desire to renounce the world and become a monk at a local monastery. This happened at Lachung. On one of the less busy days, a visit to the monastery was announced by Arun.  Somehow the sheer joy of meeting old friends and reliving the past sparked a thought in my mind. As they say about cricketers, why not retire when you’re at your peak? What more fun can one have beyond this ecstatic week that we spent together?

All friends, including Albert, were suitably suspicious of my announcement. Albert even took a dozen snaps of my worldly frame doing all sorts of mudras. 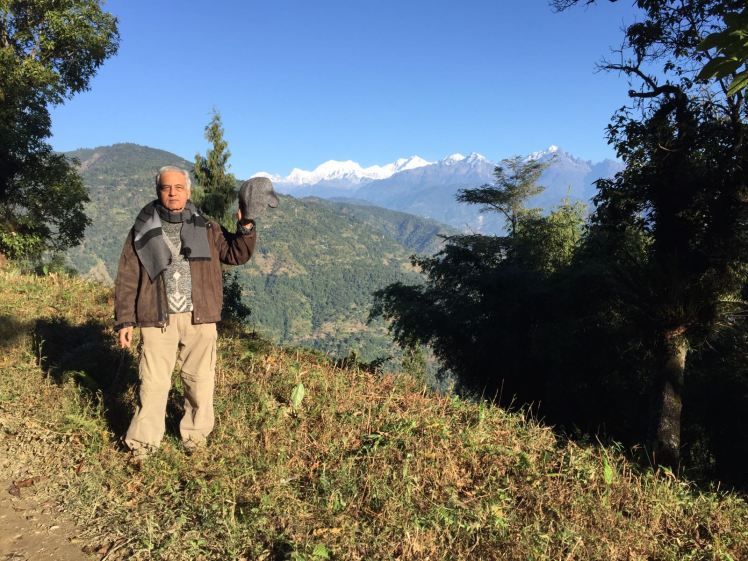 Some gullible friends like Satish even came up to me and asked, “Are you sure, Rajen?” Unlike others, Arun, the great organizer, took it up as a challenge and started making preparations, such as what they should do with the clothes that I would discard, who would share the room with Ashok then, what would happen to my worldly belongings – he decided they would either be donated right there among the tribal people, or carried back to Mumbai to be showcased in a museum somewhere in the IIT Campus. The museum would be funded by IIT alumni association.

That’s not so bad, I thought.

6 thoughts on “Monk in waiting”